I stood staring tonight at the Red Plum ad, a photo had caught my attention of a red-headed young man, 18 years old. He has a beautiful straight smile and looked to be in great health. He has been missing since August of 2013 and in that moment I prayed for him. It struck me as odd that a young man would be missing, as most times the pictures are of little girls or young women, baby boys or toddlers, not teenage young men.

Then my mind wandered on down another trail. What if God wrote up a missing person’s report for all of His children that had gone missing? 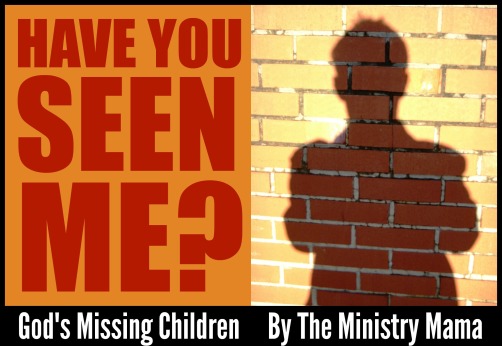 The predators have taken many of God’s children through many lies and deceits. Other children who did not wish to be found simply disappeared from church and their families, with a heart set on pursuing their own desires. How many of them are in bondage, slaves to the sin of this world, voluntarily or involuntarily? How many of them are wishing for someone to find them again so they can return home?

Do any of God’s children wish to never be found again? How long have they shut out the Father’s cries for their return to Him?

Have others given up hope? What about the parents of those children? or the families and church families that have suffered heartaches through the years knowing their loved one was missing? What do they pray for and sincerely desire?

What does God the Father desire for His missing children?

For their return… the kind of return that reunites and creates a healed bond in fellowship and love. A renewed walk with God that will never cause them to go missing again.

Luke chapter 15 is the perfect chapter in the Bible that explains God’s different tactics. Verses 1-7 explain the parable of the lost sheep. The shepherd went out to find the lost lamb when he discovered that ninety-nine had returned to the fold and he did not. When he found him, he rejoiced and asked others to rejoice with him because what was lost was now found.

Verses 8-10 tell the story of the woman who had lost one piece of silver and searches her entire home in desperation looking for it. When she discovers it again, she also asks those around her to rejoice that what was lost had been found.

Verses 11-32 tell the familiar story of the prodigal son, who asked for his inheritance and walked away from his father. In his time of riotous living he was lost, but at the most humbling of experiences while found in the pig pen (a vile animal to Jewish people) he comes to himself, and returns to a father waiting with open arms.

The common thread in each of these parables is that the lost possession/person was not really lost to God the Father. The first two had a similar endings where the sheep and coin were searched for. In the prodigal son’s story, the father allowed him to go and did not look for him but instead waited in faith for his return. I think this speaks of how God’s ways of dealing with His missing children are not always the same. Sometimes the missing children will know God is looking for them because the Holy Spirit has gone out to find them, speaking to their hearts in even their sinful situations time and time again, “You’re out here all alone, come home with me.” Other times, the foundation of Biblical knowledge will hit them in the time where they are most humbled, and they will remember the things they have been taught in that moment and make a choice to repent and turn back to the Father. The result, no matter how the Father works in the situations is that the return is to be a joyful event.

In ministry watching God’s children go missing hurts every time. Every saved person that is part of a church family leaves a hole, like a missing puzzle piece, that makes the local church body incomplete. There have been times that in being able to perceive what will likely happen in people’s lives, you can easily become angry at them (like the prodigal son’s brother) for running off and mocking the righteous lifestyle that you are trying to live. Or you become angry at God like Jonah, for giving them another chance when it seems like they have wasted so many resources, time, and relationships. But like God said to Jonah, “Doest thou well to be angry?” (Jonah 4:4 and 4:9). No, we have to keep things in perspective.

Things We Can Do for God’s Missing Children

I am thankful that when in my life I was the missing person that God never gave up on me! I  hope you can remember the ways God has done the same in your life and use those experiences to love God’s missing children.

2 thoughts on “God’s Missing Children: 3 Things Ministry People Can Do for Them”