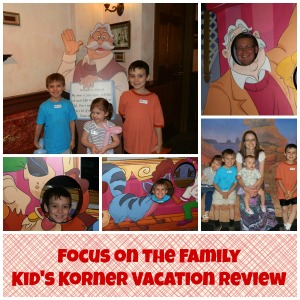 As you can tell we took our Flat Stanley with us, he will show you many special things about Kid’s Korner!

Before going for our visit I went online looking for reviews and tips about what to expect in visiting the Kid’s Korner and Discovery Emporium at Focus on the Family and found some okay reviews and lots of bad reviews from people who were opposed to Focus on the Family in general. Several people said that they felt as if they were snubbed because of their looks, that they heard music and Christian propaganda being played in the speakers, and I want to say, that we felt no such attitude and heard no music playing that day in the play area. Other reviewers seemed to be against the entire place without having ever visited, so if you read those reviews, look for other less opinionated reviews before making your choice to visit. This is a place where both Christians and non-Christians could come with no pressure whatsoever to be or do something you are not.

We did also go to their bookstore and walked through some of the other hallways in the Focus on the Family building. The bookstore is very large and our kids actually listened to a story time that they were having before we went down to the kid’s area. The story time was great but the music they had the kids sing and dance to was very contemporary. They were given balloon animals and treated very kindly and respectfully, even when Tres, our 3-year-old spoke out about something that no one even understood.

The bookstore is like most Christian bookstores, you have to pick the right types of books that go with your Biblical standards.

A Personal Note and Opinion

In one of the hallways there is a history of James Dobson and his work in writing books and creating the Focus on the Family area and group. This display gave us the feeling that he was being more exalted for his work as a psychologist than his work being something that God allowed him to do for His glory.

We believe that Biblical Counseling honors God in the best way because it teaches people what God’s Word says about topics and then teaches them how to apply the Word to their lives and live for God. America’s families do need help with the attacks that Satan is placing upon the home, but they need Biblical advice, not popular psychology. These things were bothersome to our beliefs, but it did not separate that they have a great play area for children that is safe, clean, and affordable.

We would recommend that if you are in the Colorado Springs area to go by and visit the Kid’s Korner at Focus on the Family.

This would be a great stop for families on vacation and deputation. We hope that this review gives people an honest view of the children’s area at the center. We look forward to another chance to be able to visit again!